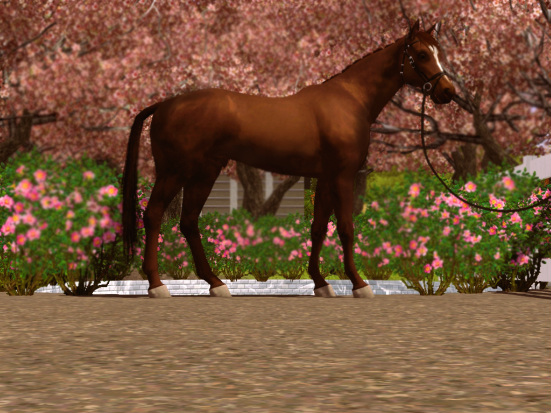 Rocco was rescued by PBE when he was 6 years old. He had been found at a traveler camp all skin and bones when he was 6 years old and was taken to the RSPCA to be cared for where he proved to be a very well mannered and high quality animal. As he recovered, his fur became glossy and a rich chocolate brown and he showed off his beautiful paces and exemplary training from when he was younger. The RSPCA had him DNA checked and found that his sire was one of the most famous and wanted arabian stallions in the world. One day Emily was looking round RSPCA when she spotted him, head held high, trotting around in a circle. He was the 3rd horse to come to PBE. After a few weeks of settling down at his new home and getting used to the stables and all the new horses, he began re-training. He was first tried at jumping. He did well, but he was just not speedy enough to compete in show jumping. His paces were slow and beautiful but were no good for either dressage, show jumping OR cross country, so they tried him in a halter. He proved to be the perfect halter show-able horse because of his gaits and gracefulness. When he was 8 years old he was tested and trained to be a riding school horse. He was very well mannered and responsive and passed easily. After he began to age he began to want to go faster, he enjoyed long gallops with his sharer and her friends, and his sharer like to take him on hacks in the country where he would like to jump logs and rocks and rivers. That's when his jump training re-re-began :3